GameTablePlanet is reader-supported. When you buy through the links on our site, we may earn an affiliate commission. Learn More

Finding a foosball table can be super simple when you have retailers like Target, Walmart, or Costco where you live. However, finding replacement parts for any game table can be difficult. Foosball players are one of the most frequently replaced foosball parts but where can you expect to find them?

So why wouldn’t someone go to Target to buy their replacement foosball men? Almost everyone lives near a Target and you wouldn’t have to pay any shipping fees to get them home. If Target has a good quality set of foosball players then that’s probably a good idea but most players aren’t designed in the same way.

If you are looking for a better quality player you’ll find more resources on online retailers but you’ll need to know what you want first. Most people go to a retailer that sells foosball tables and rate the players based on their weight, design, and fasteners. There’s a couple things that you need to look for.

Probably the most important part of a foosball player is the toe. Toes are the part of the player that actually hits the ball. The toes of foosball players are often designed differently and these variations definitely make a difference.

You also want the toes to have an etched cross-hatching design. If the toe is smooth it will be harder to pin the ball between the table and the player which is essential to game play. This design improves ball control in general.

In a game of foosball you’ll often have to shift your player’s toes upward so you can make a farther shot without your own players getting in the way. Most of the time you’ll need to take your hands off those rods and you’ll expect them to stay in that position but sometimes they don’t.

In a cheaper set of foosball the player’s toes will often weigh more than the head of the player. This makes it hard to keep your players in the position you want them in. Good quality players have weights in their heads and their toes to keep them balanced.

Your foosball players can be fastened a couple of different ways. Most traditional foosball tables use nuts and bolts to attach their players to the rods. Tables designed by higher quality manufacturers use pins. The types of rods your table has might also affect the type of fastener your table can take.

Players that require bolts are less popular than players than can use pins. Bolts tend to come loose over time or need to be replaced. They also affect the rods and make them harder to move smoother.

If your table’s rods work with players that have pins then that’s the way to go. Pins go all the way through the player and through the rod. This allows for a more balanced weight and they rarely come loose.

Here’s what an ideal foosball player would look like. These players are balanced, they have a cross-hatched texture on their toes, and they’re fastened to the rods with pins. Tornado typically manufactures good quality products so these are a good choice if you’re in the market for a new set. 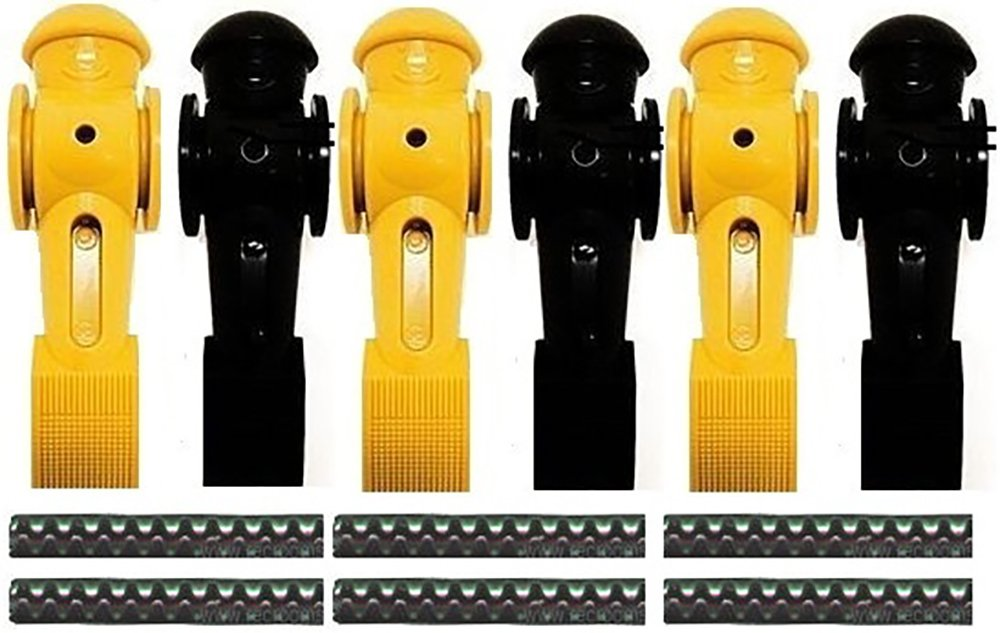 Are There Different Types of Foosball Tables?

There are many different types of foosball tables and they tend to vary depending on which country you play in.

Which Direction do Foosball Players Face?

Hi! I’m Cory Eckert and this is the place where I nerd out about game tables of all kinds. As an avid table gamer with a family of table gamers, I love getting to write about and talk with others about my passion. On this blog I share all the things I learn about table games as I go and I hope you’ll join me and share a bit back!

Please log in again. The login page will open in a new tab. After logging in you can close it and return to this page.

Sign Up Now For Exclusive Discounts on Game Tables & Accessories

Joint the Game Table Planet community and be the first to know about new tips, tricks, strategies, and game table deals!